Is Chlorine Necessary in a Pool?

Swimming pools are home to viruses, germs, bacteria and algae, which can make the swimming experience, not just unpleasant, but a health risk and unsafe. How to keep a pool free of pathogens? Is chlorine necessary in a pool?

Chlorine is possibly the most effective and affordable chemical for pool sanitization & disinfection. Chlorine keeps a check on the micro-organisms in the pool so that you can have a safe & enjoyable swim.

There are four pool chlorine types that are commercially available and are quite popular.

This post is a complete beginner’s guide to the four pool chlorine types with my recommendations on what is best for your pool under different situations. So, let’s dive in.

Does Pool Chlorine Sanitize or Disinfect?

Sanitizing kills bacteria on surfaces using chemicals. It is not intended to kill viruses.

Sanitizers are certified for bacteria only, while disinfectants can also be certified to kill viruses, mold, mildew, and fungi. Algae is a form of fungi.

The four Pool Chlorine Types are essentially chlorine based compounds that react with the pool water to form a weak acid called Hypochlorous Acid (HOCL).

The Hypochlorous Acid (HOCL) sanitizes & disinfects by killing the viruses, germs, bacteria & algae. The acid penetrates the cell walls of the pathogens and makes the cell’s protein backbone dysfunctional.

In addition Chlorine is also an “oxidizer”. Which means that chlorine can break down and destroy non-biological contaminants too!

What’s the Difference Between Stabilized and Unstabilized Chlorine?

The Total Chlorine (TC) is the sum of Free Chlorine (FC) and Combined Chlorine (CC) in a pool.

The Cyanuric Acid (CYA) molecule is made up of 3 atoms each of Carbon, Nitrogen, Oxygen and Hydrogen. The chemical formula is C3N3O3H3.

The Carbon & Nitrogen atoms are arranged, alternatively, in a hexagonal ring. The hydroxyl (OH) group is attached to the Carbon atoms. (Refer to Fig 1 below).

CYA protects Free Chlorine (FC) from UV rays by “locking” the unstable hypochlorite ion (OCL-) to the Nitrogen atom in CYA, through a weak bond.

When required, the hypochlorite ion (OCL-) ions disengage and “free chlorine” is available as a disinfectant. Cyanuric Acid (CYA) is a Chlorine Stabilizer.

What Is the Difference Between Shock and Chlorine?

As a product Shock and Chlorine are more or less the same thing. The difference is in the dose. Shock is also referred to as Super Chlorination.

To keep your pool sanitized at all times, you must maintain the Free Chlorine (FC) Level in the pool between 2-4 ppm. (The ideal chlorine level is 3 ppm). For this purpose you must ensure either continuous chlorination or atleast daily chlorination.

You must, however, Shock your pool once a week during the pool season. You will also need to shock the pool in case of abnormal increase in pathogens or algae. Shock acts as a disinfectant.

Pool Shock spikes up the Free Chlorine (FC) level from less than 4 ppm to at least 10 ppm (sometimes even to 25 ppm!). This is the “fast & furious” way of killing the pathogens & algae.

The best time to shock your pool is in the evening after sunset. The high level of Free Chlorine (FC) from the Shock should kill the pathogens & algae, overnight.

Once the sun is up, the UV rays should burn off the remaining Free Chlorine (FC) and bring the level to 5 ppm or less. This is why it is better if shock does not contain Cyanuric Acid (CYA).

Are All Pool Chlorine Types the Same?

There are four pool chlorine types that are commercially available and are quite popular. Two are unstabilized and two are stabilized. These are:

Lithium Hypochlorite (Lithium Hypo) used to be popular as a pool chlorine, but its production has been discontinued due to extremely high demand for Lithium from the lithium ion battery industry.

All pool chlorine types can be used to chlorinate a pool but they differ from each other on several physical, chemical and convenience parameters. I will explain each of them in some depth.

Sodium Hypochlorite is widely used in swimming pools, especially as a shock.

Liquid Chlorine is a 10-12.5% solution of Sodium Hypochlorite and offers the following advantages as a Shock:

Calcium Hypochlorite (Cal Hypo) is the salt of Calcium with Hypochlorous Acid. It is usually sold as a granular powder but is also available as “slow dissolve” tablets. Cal Hypo, for pool use, typically has 65-70% Available Chlorine (AC).

Calcium Hypochlorite has a very high concentration of Available Chlorine making it a good choice as Pool Shock. But, it does have some disadvantages.

Cal Hypo Shock is not recommended for use in:

Dichloro-S-Triazinetrione is better known as Dichlor. It is usually sold as a granular powder but can also come as tablets.

Dichlor is manufactured by the chlorination of Cyanuric Acid (CYA). The chemical formula of Dichlor is (C(O)NCl)2(C(O)NH). Symbolically, and easier to visualize, it is:

Dichlor Shock is convenient to use as it can be sprinkled on the pool surface, added to the skimmer or  pre-dissolved in a bucket of pool water and poured into the pool.

Dichlor Granular has a very high percentage of Cyanuric Acid so it is a great way to get both Free Chlorine (FC) and Cyanuric Acid (CYA) level up really fast.

Of course you should not be using Dichlor shock if the Cyanuric Acid (CYA) level of your pool is already high.

Trichloro-S-Triazinetrione is better known as Trichlor. It is most commonly sold as 1” or 3” tablets for sanitizing home swimming pools. Trichlor is the richest source of chlorine as it has 90% available chlorine.

In the original powder form, it is used as a disinfectant, bleach or processing chemical, in some industries.

Trichlor is manufactured by the chlorination of Cyanuric Acid (CYA). The chemical formula of Trichlor is (C3Cl3N3O3). Symbolically, and easier to visualize, it is: 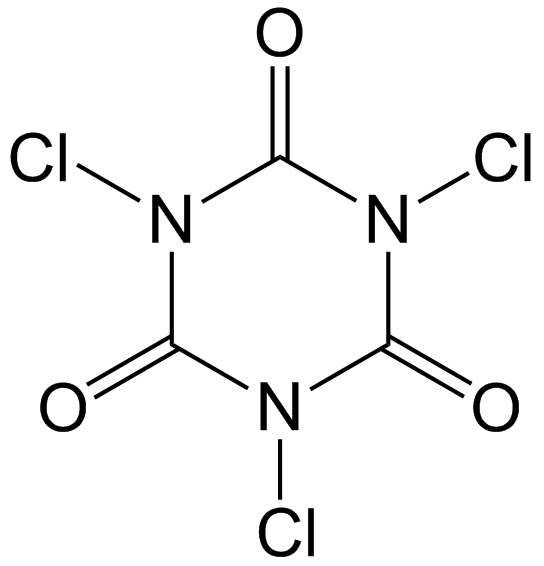 Trichlor tablets are designed to dissolve very slowly so that they will last for around a week in the pool. Trichlor tablets can be placed in the Pool Skimmer, in Floating Chlorine Dispensers or in  an Automatic Chlorinator.

Trichlor tablets are certainly the most convenient way to sanitize your pool on a regular basis. With the Trichlor tablet, you can “set & forget” for a week.

Another advantage is that you can continue using the pool while the Trichlor tablet is steadily sanitizing it. There is no downtime!

Trichlor tablets can not be used to shock a pool as it dissolves slowly and will increase  Cyanuric Acid (CYA) levels.

Champion Liquid Chlorine (Sodium Hypochlorite) Pool Shock (12.5%) is easy-to-use, fast, and effective. This Pool Shock does not have Cyanuric Acid (CYA-stabilizer) and will not result in build-up of scale. Order from Amazon using the link below:

Calcium Hypochlorite Cal-Chlor chlorine granules, from In The Swim, provide 68% available chlorine for hard-hitting immediate results! Non-stabilized formula is ideal for super shocking or everyday use as it does not contain any Cyanuric Acid (CYA). Order from Amazon using the link below:

Rx Clear Granular chlorine is 99.3% Sodium dichlor with added benefits of containing bactericide, algaecide, and disinfectant. It has a long shelf-life and low odor. Rx Clear is pH neutral and 100% soluble. Order from Amazon using the link below:

Rx Clear 3″ Stabilized Chlorine tablets are 99% Trichlor with added benefits of containing bactericide, algaecide, and disinfectant. It is slow dissolving with 90% available chlorine. The dosage is 1 tablet per 10,000 gallons of pool water which lasts for up to one week. Order from Amazon using the link below: